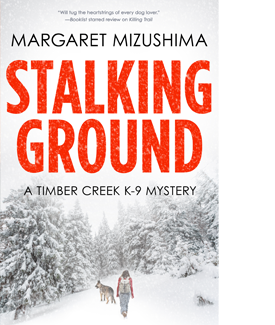 When Deputy Ken Brody’s sweetheart goes missing in the mountains outside Timber Creek, Mattie Cobb and her K-9 partner Robo are called to search. But it’s mid-October and a dark snowstorm is brewing over the high country. And they’re already too late. By the time they find her body, the storm has broken and the snow is coming down hard.

While Brody hikes down to bring back the forensics team and veterinarian Cole Walker gathers supplies to protect them from the storm, Mattie and Robo find themselves alone, guarding the gravesite overnight in the dead of the early winter. And that’s only the first long, dark night in a series of them, because as their investigation develops, Mattie, Robo, Brody, and Cole find themselves in the middle of the killer’s stalking ground–where the hunters have become the hunted.

An effortlessly engrossing read filled with tension, excitement, and heart, Stalking Ground, the second in Margaret Mizushima’s lauded debut series, will send a chill down every reader’s spine.

Available at these online retailers:

“Mizushima’s sophomore outing proves that her acclaimed series debut, Killing Trail, was no fluke…dog lovers will want to read this thriller.” – Library Journal

“Equally packed with mystery and plot development for the series characters.” – Kirkus Reviews

“This author has become a must read for me. Why? Memorable and admirable characters, whose lives I want to follow and exciting adventures that keep me turning the pages as fast as I can.” ~George Easter, Deadly Pleasures Mystery Magazine